Browse: Home   /   On Trust and Child Development In Our Fast Paced World 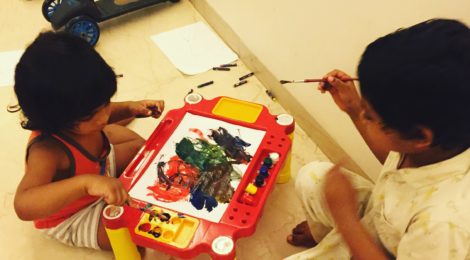 On Trust and Child Development In Our Fast Paced World

‘My 4 year old just scribbles’ I laugh to another mother.

She belies her worry for a second while masking it a moment later saying, ‘it’s ok, don’t worry every child does things at their pace’.

‘Yes I know that, but you know a lot of 4 year olds are even writing and drawing quite decent pictures’. I reply.

‘Oh see this’, she whips out her phone and shows me the beautiful pictures drawn by her 4 year old and signed by her in beautifully legible handwriting.

‘That’s amazing, she is really advanced at this’. The mother shrugs smiles and I am left despairing.

These are my thoughts: What if he needs one of those occupational therapies and I am being stuck up not taking him? What if his confidence takes a hit if all the other kids in his class are much better than him in drawing and writing? What if he has some serious issues with fine motors and I am being negligent? And other such very fruitful line of thought ensues. 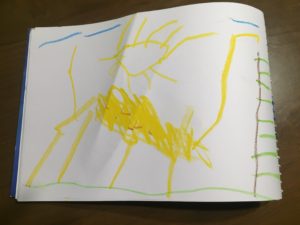 his first legible picture of a Giraffe eating leaves

A couple of months later he drew his first legible picture.Just a month before he turned 4.5. Some of these pictures in this post were something I never ever thought will happen to us till 3 months ago (dramatic I know but we mothers are sometimes).  Since then he spends time drawing and painting but has zero interest in writing his name or trying his hand at the alphabet. In one of my frenzied days I decided to battle his will against mine and with some amount of threatening I managed to get him to write his name. RELIEF. He can if he wants. He just doesn’t want to. Reminds me of someone I know. Me.

The thing is my older son N has come with very strong preferences. He sees no reason to please anyone for the sake of it. He sees no reason to do anything just because he is asked sweetly at first then a little strongly then a hand stuck around his neck pushing him to the direction of the requested activity. He knows what he likes and perseveres in his thirst for knowledge about animals, their habitats, their trivia and their books.

And he is not going to write or draw or do anything just because others do it.

Does he feel low in confidence? I really think not. He proudly takes a sheet of white paper with the imprint of his toy tiger who’s paws were painted on and stamped to represent pugmarks that he saw in a recent trip to Corbett. These are nothing but dots to you and me but in his head he can see the pugmarks. And the tiger dragged vertically across the paper representing the marks we saw where a tiger had sharpened his claws on the tree. He can proudly stand in the front of his class and talk about those dots or marks and how this correlates in the real jungle he saw and not feel the least bit conscious that the others are drawing extravagant sceneries and houses and people with all body parts intact. 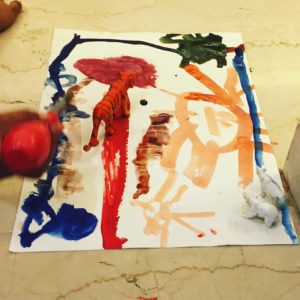 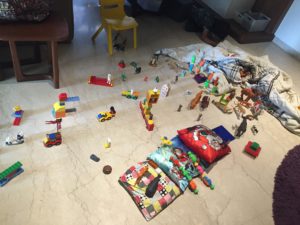 tiger showing how he can carry his kill up a mountain dragging it though it is 10 times his own bodyweight. He can explain to me in detail about a very complicated book we read a year ago but has recently gained some new insight into it that he didn’t think of then. he can build a whole imaginary world using all sorts of material using every surface of our apartment. 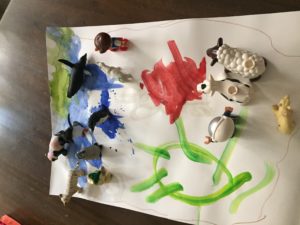 But he doesn’t want to learn how to write, or read just yet.

N hasn’t gone to any coaching classes or any classes at all other than a music class with me for a couple of years and recently football. A lot of kids in Mumbai do go for classes, which prepare then for entrance interviews in some schools but N has had no training. All his drawing and writing is raw and purely from his imagination. He is not going to be at the same place his classmates are, probably not for a long long time. I realize he hasn’t ever learnt to copy a house or had to draw anything anyone has asked him to draw.

As a mother that’s a little hard to see and although I don’t have a competitive streak in my body, my only worry is: Is he ok and am I doing enough?

And I realize that it all comes down to trust. Trust that he will do something when he is ready and able and wants to. That he knows what he is doing and he is taking what he needs from his school and his parents and his environment. That he will probably never be as good in some things but better in others and that’s ok.

Trust is something tha 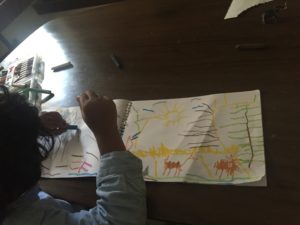 t plays a role in many of my parenting decisions. Like letting my children decide along with me when is a good time to drop breastfeeding, like doing baby led weaning with the younger child and trusting him to eat as much as he needs, to guide rather than do for them as much as possible, to let them sleep in our bed for as long as they like and semi rejoice with a mixture of sadness when they finally move out to their room. Trust.

So why do I go back and forth when it comes to schoolwork and why do I have doubts about him learning at his own pace? I suppose it comes down to direct accountability and that knowledge that the opposite person thinks I don’t do enough at home with him to help him ‘improve.’ Which I really don’t.

I find bringing out the craft box with scissors and tweezers and other things meant for developing the pincer grip and cajoling the child to sit with me akin to banging my head on the table 50 times. The plus point of doing the latter is that I can pass out for a few minutes buying me much needed shut eye. 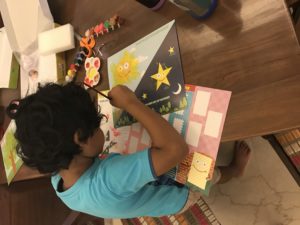 However when he fell in love with a toddler craft box gifted to the two year old and did every single craft item in the box over the Easter long weekend I stood back and let him create as much mess as he wanted to including paint on my dining table and chairs (I mean everything washes off) and let him at it. I sent about 10 decently done items to school with pride where he spoke about them and got accolades.

When you are raising an atypical child, one who doesn’t care about fitting in, or rules, or being one of the others it takes a lot to just step back and watch from the outside as this child makes his own unique way into the world.. Lucky for him I am quite a step back sort of person. My first instinct in life is to step back and yes I can do that for my son. 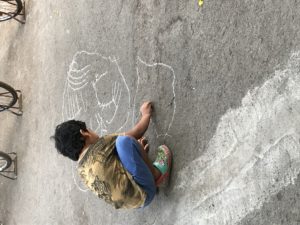 drawing on all surfaces

Thanks for reading. What are the situations you have faced with needing to trust in your young children? Do write to me in the comments.