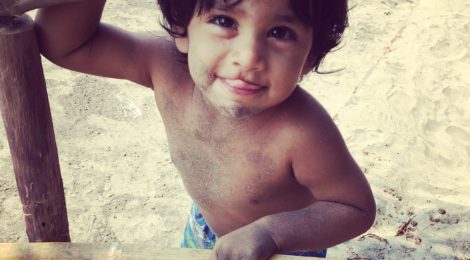 Here is my first stint with potty training and N was without diapers by 17 months. Please read that post before you read this.

A is now 20 months and is diaper free too.

What I did in common with both:

What I did different:

With A I started as soon as he could sit and was putting him on the potty regularly from 6 months. Then when he was 7 months and was doing beautiful we had a couple of trips back to back where I kept him only in disposable diapers and didn’t take him to the loo at all. This was a major setback and after that he refused to even sit on a pot for a second. I totally gave up on potty training for a long time then. However I do feel this early stint helped, as he was quite aware of the usage of the potty.

What I would do is make him watch his older brother or me peeing or using the bathroom and give him a running commentary of what we were doing.

At around 18 months he displayed an interest completely on his own to start sitting on the pot. We followed his lead and started putting him very regularly on the potty and realized he would go there.

Soon we realized that his diapers were staying totally dry and he would hold on for hours to pee in the pot. Once that happened it was bye bye to diapers. He has been saying potty for a while now and we take him everytime he says it.

At night time there are some nights that he stays dry and some nights that he does wet the bed unless I take him to the loo. For not I have taken a call to let him pee in a cloth diaper at night and maybe if need be will start taking him to pee after a while but would prefer a whole nights sleep for everyone concerned at this point.

Starting really young, giving the baby credit for understanding and taking the lead is a key I feel. I call it baby led potty training and yes cloth diapers really as per my experience. All in all there is no substitute for hard work and being dogged about taking the little one to the pot knowing very well messes and misses will happen and being ok with that.