Browse: Home   /   Should We Give Children Milk? 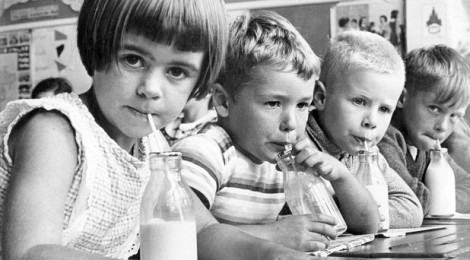 Should We Give Children Milk?

One thing I like to do on this blog is get clarity of thought through writing after doing my research. So this post is just me being me and verbalizing my internal dilemma. When I wean N, am I going to give him milk? Why or why not? At 15 and a half months N has not had any milk besides breast milk except once (buffalo) and formula once. So lets dive into my head..

For those who follow the paleo diet in its true sense, milk and dairy is a total no no. By definition, paleo eating involves eating how our ancestors ate for over 100s of 1000s of years. In the last 10000 years humans started settling down and domesticating cattle and planting grains. Slowly settlements sprung up and today our hunter-gatherer heritage is long gone.

In the past 100 to 200 years however change has been rapid. Pre industrial revolution even though we were eating many non-paleo foods over all health was far better than it is today. The reasons being: foods were found in the natural state (not so much processing in industries), lots of walking and movement, livestock eating and living in their natural state, less stress, more sleep, less artificial light etc.

While there is a lot of confusion with regards to dairy in the paleosphere, many look at dairy as a sensible indulgence. Mark Sisson from Mark’s Daily Apple is a big advocate of dairy in the full fat form like Greek yoghurt and grass fed cheese and grass fed butter. These products though not typically  ‘paleo’ have paleo qualities like maximum calories from fat, low carbs, and high proteins. The exception to this is milk. Milk is highly insulin genic, more than most carbohydrates.

While dairy is debated all over town – people who practice Ayurveda have a point of view, as do vegans, and the primal/ paleo folk, the folk with intolerance etc. – when it comes to the little children somehow they’re coerced, bribed, and tormented to finish that glass of milk before school.

But honestly from all my readings and research I have concurred the following: Giving cows milk is just recommended, and done without questioning, just because. Think about it, we are the only mammals who drink milk after we are weaned from mother’s milk.  As the adage goes: cows milk is for baby cows. So many myths have been around forever and taken as the gospel truth. I think milk is one of them.

I am not opposed to dairy. But if you manage to get good raw milk from pasture raise cows, you’re good to go. The living enzymes found in raw milk breaks down casein (casein is a protein found in milk that is said to wreak havoc in the gut very similar to gluten) and makes it more digestible. But best of luck getting raw grass fed milk.

I read a recent post on Mumbai Boss about how unadulterated milk has become a premium. One of the farms listed: Sarda farms, even has a raw milk variant. However when I called them to find out what the cows were fed I was informed that they are fed a very balanced diet of grains (roughage), water, and greens which consist mostly of grains and corn.  Pride of Cows too feeds their cattle mostly grains.

The milk we get in most of our homes is from grain fed cows. Grain fed cows are not eating their natural diets at all and therefore the milk contains a high omega 6 to omega 3 balance (which is the leading cause of inflammation) and missing out on all the stuff that makes milk nutritious. This milk is pasteurized which means all the live enzymes and beneficial bacteria that make milk digestible and healthy are killed. Pasteurized dairy from confined grain, corn and soy fed cows are what most of us bring home and is devoid of nutrition or any natural benefits.

It’s a manufactured industrialized product. It is NOT real food or real milk!

I have even seen mothers give their children packaged chocolate milk thinking that at least calcium and ‘nutrients’ are getting into their tummies.  In fact it’s nothing but a factory produced product and sugar. There is nothing nutritious or good about the milk.

So what about calcium? Here is an excellent post on the subject. I really suggest you read it because the explanation is a far better one than I could give. In a nutshell it talks about these misconceptions: that only calcium is required for good bones, that milk and dairy is required to get the necessary calcium, and it’s only the intake of calcium that matters. It’s not that simple. Our bodies are so very complicated and unfortunately skewed research has simplified it by trying to make it black and white. Hint: If you or your child is eating a good variety of real food and lots of real nutrients, you will absorb the calcium you’re getting, even if it’s not the exact recommended percentage.

My son is self -weaning. He weaned himself off the afternoon feed at 14 months and from the night feed (before bed) at 15 months. He now wakes around 12 am to nurse and then around 7 am. Since I have not actively pushed along the weaning process there will come a time where he will have had enough of the midnight feed or the morning feed and then the remaining one will go. <sob>

(A small note on breast milk : It is an actual living substance with live enzymes, probiotics and prebiotics. It’s real food if there ever was one; my child may never again eat such food again – and the milk giver is not grain fed 😉 )

If he weans after the two-year mark I don’t plan to bother with milk at all. If he weans himself before the two-year mark I am considering giving him Goat’s milk. Here is the only one I have found. Goat’s milk is the closest in property to human breast milk. Goat’s milk has more fat (which is never homogenized even when pasteurized) less casein, less lactose and fewer digestive issues. The one we get here however is not raw nor pasture raised, but it maybe the best I can do.

I do give N dairy in the form of homemade yoghurt (everyday) or grass fed cheese and homemade ghee however. Here is a case for fermented dairy:

Natural fermentation of foods has also been shown to preserve nutrients in food and break the food down to a more digestible form. This, along with the bevy of probiotics created during the fermentation process, could explain the link between consumption of fermented foods and improved digestion.

I also give N fresh coconut water mixed with the flesh everyday for his ‘tea’. Another recipe a friend told me about is for coconut milk. Take desiccated coconut, mix with warm water and put it in the blender with a date. Then pass it through cheesecloth. The result is a creamy yummy coconut milk as a drink.

Phew! I am glad I’ve got this all down so that the next time some one asks me why I don’t give my child milk I can point them to this post. What say you?

Thanks for reading today.