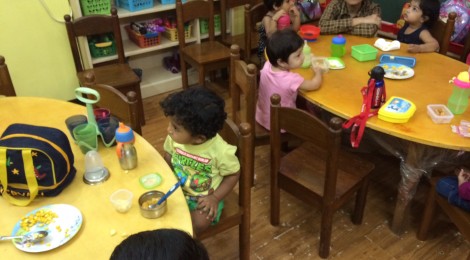 The Toddler Eats And Weaning Progress

It’s been awhile since I updated this blog on N’s meals and weaning status. Here is my last post on this series. This was when he was 14 months.

Before this I wrote when he was 11 months, 8 and a half months, and almost 7 months.

Today he is almost 17 and a half months and a big healthy happy boy.

I have never actively tried to wean him. So far his only intake of milk has been from the breast and has never had cows or buffalo milk (except once or twice). It’s quite uncommon for a baby less than 18 months to wean on his or her own. The mom in all probabilities has actively encouraged most kids who have weaned before then in most cases.

As a mom who exclusively breastfed for the first 6 months and then breastfed on demand for many months until solids were firmly established, I’ve realized that I am quite comfortable with N weaning at his own pace and I am in no hurry to push it along. I used to think earlier that I will have to wean or N will never give up on the breast but that does not seem to be true.

At 14 months he dropped the afternoon feed. He just stopped asking for it and one day I stopped offering it to him. I didn’t replace it with any sort of milk.

At 15 months he stopped the night feed. A few days before he turned 15 months he started biting me and pulling of the breast when I settled down to nurse. I noticed that the feed had started becoming really short and it dawned on me that he was telling me that he has had enough. The day he turned 15 months I stopped offering him the breast at night. Again I never offered a bottle or any other milk in its stead. I just assumed that he doesn’t want to nurse because he has eaten a good dinner and no longer requires milk.

However his middle of the night feed (12 or 1 am) and his morning feed is still on. Some mornings at 7 am or so they last for half an hour or so and we normally fall back asleep.

I am in no hurry to wean him of these and I now know that when he is done he will find a way to tell me so.

If I had written this post a mere week ago I’d have said that all the stories of fussy toddlers, toddlers who choose what they want to eat, or toddlers who have tiny appetites do not apply to me.

However, N started playschool two weeks ago and has now realized that he can ask for different foods. I anticipated this of course, but oh mealtimes have become somewhat of a tussle lately. The first couple of mealtimes had meltdown moments. Lately though if N puts up a fight I just end the meal and he can get back to playing and I don’t give him another morsel till the next mealtime. I hope he understands that this is what I get to eat at home and if I don’t finish up, well I don’t really have a choice do I?

Anyway let’s get down to the food:

8:30 am: one whole egg plus an egg yolk cooked in coconut oil either scrambled or like an Omlette with veggies or cheese. Fruits. This meal is the one with the least resistance. He walks into the kitchen every morning saying ‘anda bana’ which means, make me eggs.

12 pm: This is a new addition as they have a small snack time at playschool. He takes a little fruit or raisins but normally digs his grubby fingers into whatever snack the playschool has for the kids. Previous to this it used to be lunch at 1 straight after breakfast.

1 pm: Lunch. Normally a big serving of cooked veggies with a spoon of rice and daal, and a bowl of homemade yoghurt. Sometimes chicken curry which is normally quite spicy, but N eats a good deal of spice now.

5 pm: Fruits and Coconut water with the flesh. Sometimes cheese.

7:30 pm: Dinner. Two pieces of fish and soup. Or cooked vegetables, chicken curry, a spoon of rice, a bowl of homemade yoghurt.

None of these meals last more than 10 minutes unless we are out for lunch. He is normally finished in about 10 minutes. Whether he has finished everything on his plate is immaterial. When he is full, he is full and I get him off his chair.

As you can see from this, N is still primal and a delight to feed, in spite of toddler temperament!

Thanks for reading. Do share your experiences with feeding your toddler.

← Of Hormones, Motherhood, Weight Gain and Extended Breastfeeding
We’re All Sleeping Through The Night! →