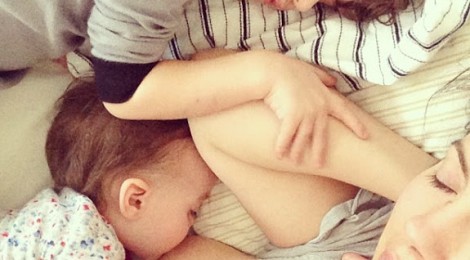 Looks like I am doing a breastfeeding series. Since I wrote this as a guest post on BabyChakra I am going to post this here too.

Breastfeeding as we all know has tremendous advantages for the baby and for the mother. It can’t be compared with any other artificial method of feeding / nutrition, especially in the early months.

Somewhere in the early parts of the last century industries came into being and mothers in the West were forced to leave babies at home and go out to work. MNC’s in turn developed artificial milk or infant formula in order to give these babies good nutrition.

Over time this somehow translated into infant formula being a superior food thanks to big MNC budgets. The big guns like Nestle realized that developing and underdeveloped countries have huge potential to sell formula to even though the mother is mostly with the baby at all times by convincing families that infant milk is indeed better and healthier. Read here for more on how Nestle is guilty of being a ‘baby killer’ in poor countries.

Eventually this led to a couple of generations of women in many parts of the world who didn’t breastfeed and it went out of fashion.

Today a lot of myths abound thanks to this trend by which a lot of women stop feeding their babies prematurely. Here are some of them:

Breastfeeding is best for baby.

It’s not the best. It’s normal. It’s the only milk or food for baby and nothing else should do. If a mother thinks breastfeeding is best but Formula is the next best thing she may decide to give infant formula instead of breast milk. If she knows that there is nothing else that compares and all the hidden ingredients may cause harm in the long run she may get help, try really hard to breastfeed, and only then turn to formula.

One of the reasons that breastfeeding is essential is that babies are born with immature gut or intestines. They are pretty porous and not sealed. Breast milk seals the intestine. Formula does not. A formula fed baby may have something called ‘leaky gut’ while growing up as toxins and waste gets into a blood stream instead of staying within the intestine and getting excreted as poop. ANY amount of formula in the first 15 days is a no-no for this reason.
Baby’s insides and digestive systems are delicate and by feeding artificial foods we’re messing with those systems.

Breastfeeding is just about feeding.

This myth prevents a mother from nurturing and pacifying with her breasts when the baby seems upset or is crying. Thanks to this myth, mothers put babies on schedules.

Many mothers give formula at night in the hope that the baby will sleep longer. But babies who are just waking up to snuggle with mom or bond will wake up anyway. It’s not plain hunger that wakes a baby. The baby’s temperament plays a pivotal role in night waking’s. Some sensitive sleepers (like my son who has never slept more than 5 hours at a stretch in 20 months) will wake no matter what and have a hard time calming down without the caregiver. Some easy temperament babies may sleep through from 2 and 3 months whether breast-fed or not. Feeding night and day specially in the initial couple of months is essential for establishing good milk supply and most moms can easily carry on feeding for a couple of years or more if this initial supply is well established.

Sometimes people around the mother may tell her that it’s not possible to feed so often and still have milk, or maybe the baby is spitting up after every feed and the mother thinks of topping up with a bottle thinking the baby may feel hungry soon. But a breast is not a bottle. They are never empty and will always have milk. The more you put baby to breast the more milk you will have.

I will spoil my baby by nursing her to sleep/ nursing on demand. It’s impossible to spoil your baby firstly and specially not by breastfeeding on demand or nursing to sleep. Your breast is your baby’s home. Sometimes all he may want is some snuggling at the breast

My baby should be sleeping through the night at 3/ 6/ 9 months. Many a mother thinks that there is a particular time frame for when a baby sleeps though the night. I remember I was one of them. When I stopped worrying about it once my baby turned 8 months we all slept better even though he continued to wake up to nurse.

Mothers worry that breastfeeding is stopping him from sleeping though the night. This actually may be true. Your baby may be just waking up to nurse and bond with you when he is at his most vulnerable. But is that really a problem? It’s something only you the mother can answer.

Thanks for reading today. Hit me up with more myths that you’ve come across that prevents successful breastfeeding.