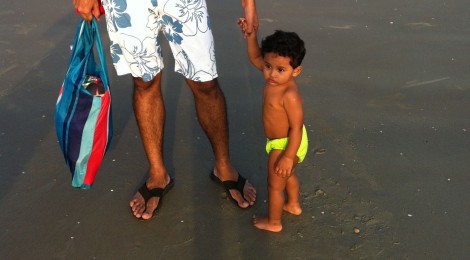 I’d written my first post on Potty training here where I wrote about why the modern views on potty training where the literature points to waiting till the child is ready may not be the ideal way to potty train.

So N is about to turn 18 months on the 4th of April. And he is officially diaper free since the 4th of March in the day. At 17 months. (Excuse me for the pride in my writing but I am quite happy with this milestone).

How I potty trained my son:

I made him wear cloth nappies. This is the number 1 most important thing I did! Since N was around 9 months (around the time he started crawling) I only made him wear cloth nappies at home. Since he was slightly regular with the poop he used to poop in his diaper in the morning when he woke. If he hadn’t pooped I’d change his disposable diaper and keep it on until he pooped. Then I’d change to cloth for the remainder of the day until evening when he went out of the house.

How this helped: When babies are in disposable diapers they don’t realize the sensation of peeing or passing their waste. The diapers are so dry that they eliminate without being truly conscious of the act. When I put N in cloth he would actually look down between his legs when he peed. The wet and warm sensation of something gushing through your legs is definitely not to be missed. That’s how he actually began to realize this comes from my body. That’s the first step to controlling it of course.

I started putting him on the pot. Like I wrote in my last post I started putting N on the potty with a seat insert at 11 months. Since he had already discovered the sensation of wet waste he was ready from the next day to eliminate in the pot. Within days he started coming to me and grunting if he needed to use the potty to poop. While there were some accidents, he got the hang of it very soon and at 13 months he was poop free in his diapers.

For the pee. At between 15 to 16 months I noticed N had stopped peeing in his cloth nappy and he would wait till he was taken to the potty to relieve himself. Before this I would take him to the potty at random times. Sometimes he would pee there and I’d clap and praise him and sometimes he wouldn’t but would happily pee wherever he was in the house and watch the urine fall and point to it or come to his nanny or me and ask for it to be cleaned. Around 15.5 months I realized that he had understood that I must hold until I am taken to the pot.

We took the plunge. After about a month of observing that N was holding till he was taken to a potty I decided to do away with the diapers. N started playschool on the 3rd of this month and I sent him in a diaper. He came home dry. The next day, on his 17-month birthday I took him to school without a diaper (in underwear) and I’m please to announce that it’s been a month and N has not wet his pants.

I take him out to various places without a diaper and I take him to public bathrooms to pee at intervals of an hour and a half. If he feels like peeing he pees but if he doesn’t he will hold it till he comes home and pees.

Night diapering. At night I still put him in a diaper. The reason for this is this post where I wrote about how we have all finally started sleeping at night. I know that all it will take a couple of nights of us waking to take N sleepily to pee and a little bit of bedwetting. I just want to sleep for a couple of weeks before we attempt this. I will keep you posted when we do attempt to wean him off the diaper at night.

Update: N went diaper free at night 2 weeks after this post was written.

Cloth diapering is not easy. I have help and that’s why I attempted it in the first place. However in the long run I feel it’s essential in potty training and is far less work now that N is diaper free.

Taking N to the bathroom when we’re out and about is a little bit of work. But I still feel it’s well worth it because of the dignity it brings the child.

N is the youngest in his playschool class and the only one without diapers. When I see children that are double his size still in diapers I feel it was worth every bit of the work.

Cloth diapers are reusable, eco friendly, and friends of the environment.  Disposable diapers have one of the worse carbon footprints and are harmful and toxic waste.

I feel so much happier looking at my toddler in his cotton underwear. When he wore diapers I use to itch to come back home and remove them so he could run around free. In my head him wearing diapers was he in discomfort though he has never had even the most minor of diaper rashes.

While this potty training was early it was also pretty much child led where I didn’t really push him into anything but just let him feel the sensation of peeing and pooping and waited till he wanted to do it on the potty.

Look you can potty train with disposable diapers but think from a toddler’s point of view. Why would he or she want to take the trouble to stop what she’s doing when she is completely comfortable and dry by eliminating while she is playing?

Cloth diapers are absolutely a must as the first step if you want your child to be diaper free young.

Thanks for reading. Let me know in the comments how potty training went for you and if you’re considering cloth diapering after reading this!