Browse: Home   /   Vegetarian and Primal? some ideas for you 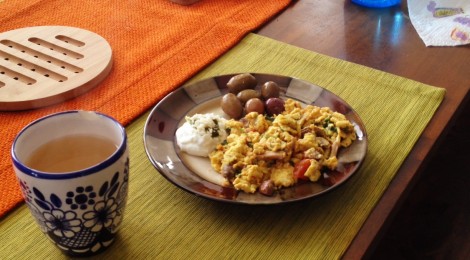 Vegetarian and Primal? some ideas for you

Not much has been written about being vegetarian and primal. I think that’s because the two terms contradict each other.
READ : Can you be vegetarian and primal?
While being primal has a lot to do with eating real food, avoiding processed modern junk, and doing real workouts, it also has a lot to do with embracing our ancestry, reprogramming our genes and connecting with our bodies. And before agriculture and grains and modern conveniences, we thrived on animal fat (a major percentage of our calories was derived from animal fat). Cut to present day Gujarat, or Tamil Nadu, where the major percentage of calories is from super processed carbs and refined vegetable oils.
In many places where people are embracing the Paleo lifestyle, vegetarians are vegetarians because of personal reasons, a choice they’ve made because of a conscience or the (false) belief that it’s healthier. So when confronted by research and logic, it’s not too hard for them to make the switch slowly but surely. If you’re one of these, here are some ways to start eating meat.
In India however, most vegetarians are that way because of deep-rooted beliefs, social and religious reasons. Fear not, neither this post nor this blog is not going to try and change this belief. For even though I am a beef loving pork worshipping hindu (by birth only) I know better than to embark on a fruitless mission.
Instead my job is to make your life easier. If you are vegetarian, and the sound logical reasoning behind the primal lifestyle beckons you for a 30-day tryst, then here are some ideas for you.
I think, being vegetarian and primal is possible. It’s only harder because vegetarian primal fare is not as interesting or delicious and the sources of protein are not as rich and clean as animal protein. It is hard, but I think it’s worth making the effort, because once you make the switch, you won’t look at a dosa, bread, or batata wada in the same way ever again.
I’m briefly going to outline some recipe ideas for being primal and vegetarian, over and above the regular salads and bhajis. And I’m going to try and keep them coming. The food pictures and recipes have been contributed by one of my readers – Apurva Mehta and as he continues his culinary experiments in paleo veg cuisine, he promises to contribute more. He promises to share some neat spaghetti squash recipe amongst others.
But first some general advice for vegetarians:
Eat lots of mixed nuts – almonds, pista, hazel nuts, cashews, walnuts (too high in omega 6 content though) etc.
Try opening your mind to eating eggs.
Eat fresh paneer instead of Tofu which is a highly processed food and not primal at all.
Don’t be too scared of eating fatty dairy products like cheese, you’re going to need it because of the lack of other forms of protein. If you’re trying to lose weight don’t go over board though.
Be open to intermittent fasting.
1)    Paneer Makahanwala with paleo bread.
Shown in the picture is paneer makhanwala, but you can eat paleo bread with your favourite vegetable instead of rotis or rice. 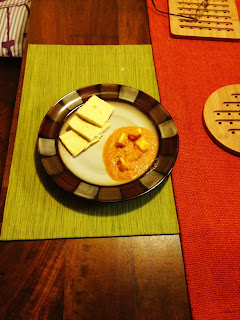 Recipe for paleo bread: 3 cup coconut flour, 3 cup almond meal, 5 cups coconut milk, 4 eggs blended together. Preheat the oven to 180 degrees and lay out the batter on a parchment. Bake for 20 mins, flipping it over in 10 minutes.
Coconut flour recipe. Coconut flour is simply dried, grate coconut meat. Grate dried coconut (khopra) and dehydrate in an oven or by drying in the sun. Then blend in a food processor until you get flour like consistency.
Almond meal recipe : put almonds in food processor and grind. Don’t bother blanching almonds.
Paleo bread is a good substitute if you miss the breads with your meal. You can eat it with paneer makhanwala  or any other vegetable made at home. Instead of eating your sabzi plain, make some nice hot paleo bread as an accompaniment.Paneer makhanwala recipe :
Ingredients :
200 gms paneer
200 gms Fresh Cream (Malai)
200 gms Tomato Puree (Tamatar Ka Raas)
2-3 tblsp Butter
2 tblsp dried Fenugreek Leaves (Methi Ke Patta)
1/2 tsp Red chilli (Lal Mirchi) Powder
1/2 tsp Garam Masala Powder
2-3 Green chilli (Hari mirch)
As per taste Salt (Namak)
How to make paneer makhanwala:
Melt the butter in a pan, add slit green chillies, tomato puree, kasuri methi, salt, red chilli powder and simmer for 4-5 minutes.
Add the cream and garam masala powder and cook further for 2-3 minutes.
Add the paneer pieces and cook for a minute.
Serve hot garnished with coriander.
2)   Masala eggs with Olives and yoghurt. 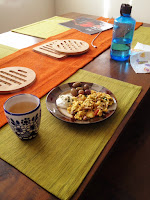 Not so hard, nutritious, simple, and delicious.
Heat coconut oil in a pan, break open and throw in 3 eggs, salt, and your favourite desi spices. If you’re not a regular egg eater be sure to add more masala so that you ease into the habit. Scramble eggs and masala with a spatula and cook.
Serve with paleo bread, olives, tomatoes, yoghurt, or cheese.

Not exactly desi, but simple to make and delicious nonetheless. 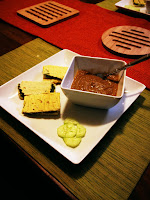 If you have any recipe of your own, desi, vegetarian, and paleo, do share. Looking forward to contributions. Thanks for reading and let me know if you try any of the above.