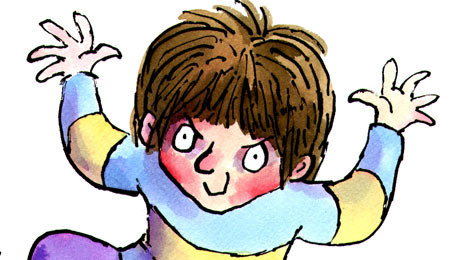 
Nikhil was quite the horrible boy when we were growing up. He used to hit his little brother Amar, used to fight with all the kids, growl, push do nasty things etc. Today he lives all alone with a permanent scowl upon his face. His mamma and papa have a life and his brother had moved out and doesn’t talk to him and he has no friends.

This story takes on many shades and dimensions depending on where we are, what we are doing and what bad behavior is being orchestrated at that moment.

Except that he is catching on fast. He says: even Nikhil starts with N and even Nirvan starts with N. Pretty sharp for a boy who pretends he can’t recognize alphabets.

‘Am I being like Nikhil?’ He asks?
‘Ofcourse not my darling’ I reply quickly. He looks amused. This isn’t going to work for much longer so I need to leverage it quick.

So far the imaginary Nikhil and his brother Amar are working wonders in trying to keep the 3 year old at bay and even stops him from sitting on his brother sometimes! When he is doing something that is inappropriate I just call out to him and say do you want to hear about what that boy named Nikhil did? And I’l start off at the point of what my 3 year old is currently doing and continue into a story. Sometimes it’s a pre cursor – Are you going to be Nikhil or Nirvan at the park today?

What I have found out is that ‘story’ is the magic word in our house, one that will entice N from dropping everything and becoming still to listen. Stories stop tantrums, stop a meltdown, make him eat faster, or simply just get him to change tracks.

I am not the world’s greatest story-teller but us parents sure need to be on our toes and find the next best thing that works.
Stories are really amazing as you can convey so much and paint such lovely pictures with characters and even moral behavior can be conveyed in far less preachy ways with a story.

I’m eager to know what works in your household as discipline measures? Thanks for reading!